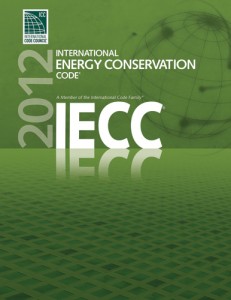 Just back from my workshop on IECC 2012 ( 2012 International Energy Conservation Code), which is the model that many of state building codes here in the US of A. While the workshop was as exciting as it sounds I would like to share one take away with you all. As compared to the 2006 building code energy requirements, the homes or additions built using the 2009 code ( what most states are currently using) are about 12%-15% more energy efficient. The 2012 code will offer a 30% improvement in energy efficiency over the 2006 code, and the 2015 code is designed to be 50% more efficient. Many towns, such as where I live in Newton, have adopted a “stretch” code which generally means they are working one “version” ahead of the current state code. In other words homes worked on in Newton are already working with the 2012 standards.

The average home using the 2012 energy code, will save $621/year in energy costs, with an estimated additional cost of $1677 to achieve that goal. (utilizing items such as additional insulation, newer energy efficient appliances, LED lighting and such). That makes the return on investment of 3 years, which is not bad, especially as we watch gas and oil prices start to soar.

Cases in Action
Good as New, But Better!