Getting into Hot Water

By Steve on February 5, 2014 in Building & Energy Performance, Sustainability

Recently I received this letter from a client about replacing their heating system.  I’ve found that the questions they asked come up quite often, so I decided to share…

We are about to replace our heating system.  As you may recall, we have a 60-plus-year-old boiler providing forced hot water for our first floor, and a 15-year-old furnace providing forced hot air to the second floor.  Both are oil-fired. We just brought gas to the house and are about to purchase a new gas-fired heating system. After waffling about this, we’ve decided to go with a gas-fired boiler that will also heat the second floor by means of an air-handler (I think it’s called a hydro-air) that is heated by the boiler.

I believe that you had recommended this, but many of the people we brought in to evaluate our system didn’t recommend that.  They recommended keeping the two systems separate, i.e., a boiler for the first floor and a furnace for the second floor.  So my first question is: Does this make sense to you?  Is there any reason we should be concerned about this? Our second question has to do with which boiler to go with, which has to do with our hot water supply.

We currently have a 20-something-year-old SuperStor 40 gallon hot water tank.  We’ve been told that it could last, but that it would be cheaper to replace it now rather than later.  We have a choice between two boilers. The first is an Alpine Burnham boiler.  If we got that, we would buy a replacement hot water tank. (Our installer recommends a 50 gallon one that will provide us with a bit more hot water.) The second is a Rinnai boiler that would eliminate the need for a hot water tank because it has an “on-demand” instant hot-water capability. If we got this boiler, we would simply get rid of our hot water tank.  This option would be cheaper, because we wouldn’t have to buy a new hot water tank.  So, here’s my question:  What do you think about getting an on-demand instant hot water system as part of our heating system, instead of another hot water tank? And what do you think of Rinnai as opposed to Alpine?

Glad you’re moving into the modern age as far as heating and DHW (domestic hot water)!

I just installed a system that you described, so yes I do recommend that approach. You would have only one boiler to maintain (and not much maintenance, really). If you were to keep the old forced air furnace you would have an older, less efficient system. Also hydro air carries more humidity (I can’t explain why without a long explanation), which translates to better air quality than traditional forced hot air.  You will also be able to maintain two zones of heat. (You can create more zones if you change your ducting a bit but that’s probably not worth it.) 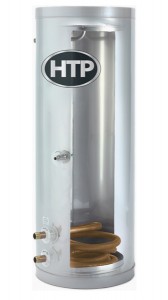 As to which way to go with the boiler choice, both are great machines.  The difference is this: If you have a big soaking tub or Jacuzzi an on-demand system will have to be “over sized” to produce enough “gallons per minute” of hot water.  What I would do in this situation (which is exactly what I’m doing on my current project) is install an indirect hot water system called a Boiler Mate.  It’s similar to your old SuperStor—think of it as a large super-insulated Thermos bottle that stores the hot water.  It will keep water at temp for a long time without needing to reheat it.  The beauty of this is that you can use your super efficient boiler to make that hot water, whereas a typical stand-alone hot water tank is not very efficient.

But…if you don’t have the need for large quantities of water, an “on demand” system is the way to go (we have that in our house). You only make water when you need it and you’re using a very efficient boiler to do it.  The boiler will be sized to how many bathrooms you have so that when all the kinder come home they can all take showers at the same time.  The only problem is that since you will not run out of hot water (as it’s made continuously), it’s hard to get folks out of the shower!

[Note for those who observe the Sabbath: an “on demand” boiler will fire on every time you call for hot water, such as when washing your hands in hot water.  If this is an issue for you (and you don’t want to be stuck with only cold water on Saturday), a BoilerMate makes more sense.]

The only thing I would add is that (if you’re not already doing this) you can run your AC via the same air handler and use the same ducting.

Wishing you much warmth and low fuel bills,

One Response to Getting into Hot Water