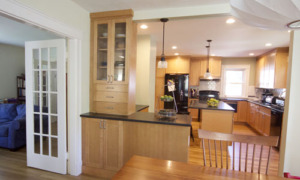 Steve redid our entire kitchen, and was a pleasure to work with. From the beginning, he made sure we understood the scope of the work – including work that we might consider because we had walls and the ceiling open – and explained upfront when the plan had to change, and why. Communication was never a problem with Steve. Steve and Asher were also happy to explain what they were doing, and why, at any point in the process, whenever we asked. Without making me feel dumb for asking. I especially appreciated Steve’s patience with me while I worked through deciding whether or not to repurpose one of the old kitchen cabinet doors in the new kitchen. Steve understood why I wanted to do this (the cabinet was original to the house, looked great, and would have been a nice reminder of the kitchen we were losing), and became a design partner, discussing alternate ideas with me. 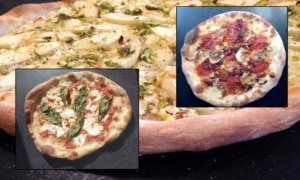 Steve was either always on site, or came by at the end of the day to check on work that his subcontractors had done. In that case, he always noted where work was subpar, and made sure it was fixed (I should note that this didn’t happen often).

But the main thing I liked about working with SteveWorks is their integrity. I trusted that when Steve suggested doing something a certain way, he wasn’t looking to make more money. It was the right way to do it, and it would last, meaning less money in the long term. This integrity extends to Steve’s subcontractors. They’re just as detailed oriented as Steve is. They do high quality work, and are happy to explain what and why.

Finally, Steve, Asher, and the rest of the crew were all respectful. They knew that their workplace was our home, and treated it as such. I’d work with Steve again in a minute.

So did your basement flood?
steveworks to Host March Meeting of Bottom Lines