By Amy Cafazzo on April 5, 2017 in Community Service, Universal Design 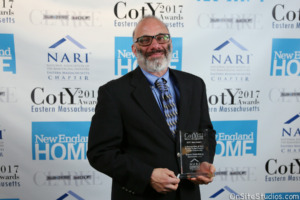 Steve Greenberg was honored with the first-ever HERO Award by his remodeling colleagues at the 2017 EM NARI Contractor of the Year Awards.

We are honored to announce that our own Steve Greenberg was presented with the first-ever HERO Award from the National Association of the Remodeling Industry (Eastern Massachusetts chapter: EM NARI)! The award was presented by Mitzi Negic, of the Ultimate Bath Store, on March 29 at the 2017 Contractor of the Year Awards. The surprising win was awarded to Steve on behalf of his leadership and tireless work in remodeling the home of a WWII veteran and his wife in Roxbury.

“The project spanned months as we waited for donated materials and volunteers to help with the project. Throughout that time, Steve worked tirelessly – spending hundreds of hours to leverage relationships to get the work done,” Mitzi explained.  “And when there were gaps, Steve was there himself to make sure the job got done.  Our chapter is grateful for his service in helping us complete the project for this deserving couple.”

“I was very honored to receive an award like this from a group of professionals and friends that I highly respect,” said Steve. “It was such a privilege to work with the family, and this man in particular, who has done so much in service to our country. To then win an award for helping a WWII veteran…well, I’m still buzzed about it. In fact, I keep looking at the award to really check that my name is on it!” 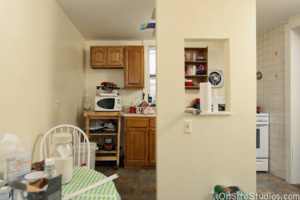 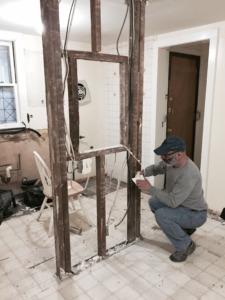 Before, the kitchen had a large partition dividing the already limited space, making it extremely difficult to navigate and prepare and eat meals.

During the renovation, Steve spent countless hours on site, from demolition through to completion. Back in his office, he spent time organizing volunteers as well as talking to colleagues to try and find donated construction materials.

The project took place during the summer of 2016. The homeowners were living in a very dated home that was no longer functioning well for them as they aged. Steve and his team focused most of the remodel on the heart of the home: the kitchen – both of them. In this case, the home had originally been built as two units so there were kitchens on each floor – both in dire need of renovation. Adding a washer/dryer to the first-floor kitchen (laundry was originally in the basement, down a set of steep, rickety stairs), maximizing space, and streamlining the kitchens for ease of use were the top priorities.  Finally, stair rails were added throughout the home for safety. 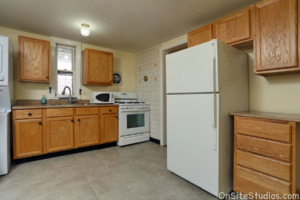 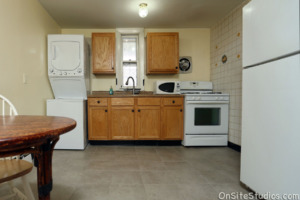 The partition has been removed, laundry added, and tons of cabinet space complete this kitchen renovation.

Please join us in congratulating Steve on this amazing award!