Team steveworks is honored and thrilled (and super tired!) after having completed the Bike MS: Cape Cod Getaway 2017 this past weekend. Ari Greenberg, Ariel Hornstein and Steve Greenberg completed the two-day, 150 mile ride from Boston to Provincetown. The weather didn’t exactly cooperate – it rained for three hours the first day which made for a s-l-o-w 30 miles. There’s no place to hide from the rain on a bike! 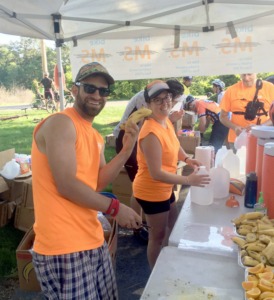 Asher and Jules ready the bananas and beverages for the riders.

Meanwhile, Asher Greenberg and his girlfriend, Jules Marcus, ran a rest stop. Asher reports that they spent a lot of time cleaning rider’s eyewear due to the pouring rain on Saturday. By Sunday, they were out setting up another rest station at 5am. Oranges, bananas and Gatorade were readied for the riders needing to refuel.

2017 marks Steve’s 13th ride and Ari’s 12th.  This year alone, Team steveworks raised $8,000 to find therapies and a cure for multiple sclerosis.   As Steve explained, “Just recently my mom, who has MS, told me that her doctor reported that her MRI revealed her MS hadn’t progressed since last year. The therapy she has undergone over the years is finally paying off. There are many folks who are finally starting to see that the drugs and therapies they undergo are starting to work. The more we raise for MS, the closer the cure becomes.”

It’s really impressive that some of the riders have been diagnosed with MS themselves, but are still able to ride.  There were also a few tandem bike teams where one of the riders had multiple sclerosis.  And, of course, many of the bystanders cheering the riders on along the route have been personally touched by MS.

If you wish to join the fight and donate to the National Multiple Sclerosis Society, click here.  THANK YOU!

Ari, Steve and Ariel raise their bikes in celebration at the completion of the ride in Provincetown!