By Tova Greenberg on October 18, 2017 in Design, Education

This summer, Steve and I finally visited a site I’ve been dreaming of since I was a teenager–Frank Lloyd Wright’s Fallingwater. Perched above a creek outside Pittsburgh, it’s considered one of Wright’s greatest achievements.  The house did not disappoint. The unfolding of spaces, views, and materials were truly amazing. 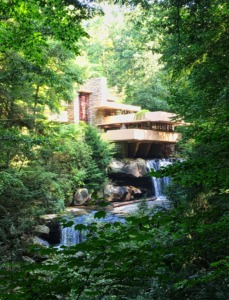 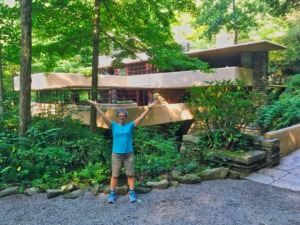 Equally interesting was a house a few miles away called Kentuck Knob, also designed by Wright.  It’s a souped-up version of Wright’s Usonian House for the masses, built for friends of the Kaufmanns, owners of Fallingwater.  Of note is the fact that Wright was preoccupied during the construction supervising the Guggenheim Museum and other major projects and barely visited Kentuck. As a result, the builder had an unusual amount of latitude with the construction details and, unlike most Wright homes, Kentuck Knob does not leak!  Steve really appreciated this!

Our takeaway: great architecture is inspiring, but a design-build collaboration often produces a more “liveable” home. 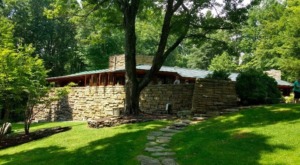 Kentuck Knob is a single-story “Usonian” house. Usonian, meaning affordable for the average American, was a signature design of Frank Lloyd Wright.

We love visiting these historic, architecturally-inspired homes. Next on our list: there are more Frank Lloyd Wright homes for us to see in upstate New York, The Gropius House in nearby Lincoln, MA, and some of the Shaker homes and barns scattered around New England.  Amazing architecture is everywhere! 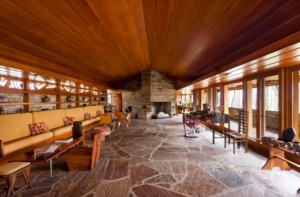 The living room at Kentuck. 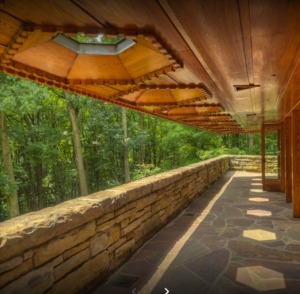 The incredible patio at Kentuck. Look at the light patterns on the patio stones!

One Response to A Visit to Frank Lloyd Wright’s Fallingwater