We saw this when trolling the aisles of a home improvement store: a low energy usage light bulb that uses “new” technology. It’s not LED – instead, it’s based on Nikola Tesla‘s AC coil technology that dates back to 1891!

These are different than LED (light emitting diode) bulbs, because the Tesla technology (not to be confused with Tesla cars, solar panels, and batteries) produces an electromagnetic field which excites the phosphor coated on the inside of the light bulb glass. The bulbs are marketed under the “finally” brand by a company based in Boston called the Finally Light Bulb Company.

The benefit is that the finally bulb emits a fuller spectrum light, which provides “truer” colors.  LED bulbs tend to be either bluer in color, or instead just miss parts of the spectrum. 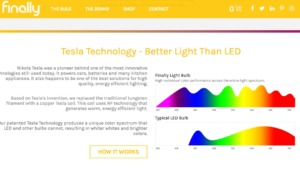 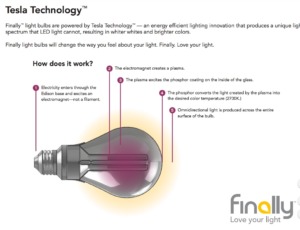 The only downside I found is that the finally bulbs use a couple watts more, about 13, than the LEDs, which use on about 11 watts on average.  Fortunately, the bulbs come with a standard size base and can be used as replacement bulbs pretty much anywhere, including lamps or light fixtures.

I still prefer and install LED lighting for under-cabinet lighting, and overall ceiling lighting, but where color is critical, or enhances your home, I would probably recommend using the finally bulbs.  Also, many of the fixtures we’re installing are dedicated LED fixtures – although the LED strip or bulb is replaceable.  I’ve just started testing the finally bulb in a lamp at home.  It does take a second or two to come the full brightness, but it doesn’t seem to heat up.