Residential designers and builders agree that lighting is one of the most important elements in how homeowners feel in their space. Lighting technology has been evolving since the invention of the incandescent light bulb. With an eye toward sustainability and budget-friendly products, CFL (compact fluorescent lightbulbs) and then LED (light emitting diode) technologies took the lead in lighting for the home. And now there is a new player on the scene: OLED – Organic Light Emitting Diode.

The colors offered by LED lighting are impressive, too. In lighting terminology this is called “temperature” and can range from warm to cool. Think of yellows and reds for warmth versus bright white and undertones of blue for cool. While incandescent bulbs are fairly limited in their temperature range, LEDs can cover the spectrum.

LEDs became popular in task lighting, especially under cabinet strip lighting for its brightness and clarity. OLED  may well surpass LED lighting because it takes even less power to make brighter light, making it budget and environmentally friendly as well. It is thin and flexible so it can be used in many applications. 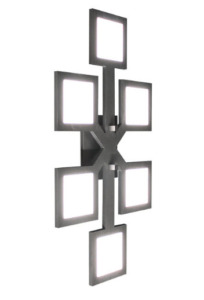 This OLED light is available on Houzz, but will cost a pretty penny at $2590.

OLED technology is used currently in televisions, computers, smart phones and tablets. And now wonderfully innovative lighting fixtures in fabulous shapes are using OLED tech. We’ll be seeing more and more of this in the future.

Now that we’ve got you all excited about OLED, we have a bit of bad news. Currently, OLEDs are very expensive compared to LEDs. Plus, they don’t currently last as long as regular LEDs. However, as LED became the industry standard, the price for LEDs came down while efficiency increased – the same will hold true for OLED.

Stay tuned as we will have more to say about this emerging technology. There has never been a more exciting time to be in the home renovation business!

Interested in learning more? Check out this blog from CNET.