Why We Recommend Induction Stoves 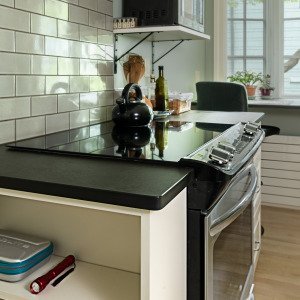 Hopefully you know where the steveworks team stands in terms of choosing electric over gas. (HINT: electric all the way!) We thought we’d take a minute to take this stance one step further and get specific in terms of ranges and cooktops. Hands down, at steveworks, we believe that an induction range/stove is your best bet for ease of cooking, health and safety, and energy efficiency.

You’ve probably seen ads highlighting just how quickly water comes to a boil on an induction cooktop. That’s no joke. We particularly liked a blog post on our favorite Green Building Advisor site that extoled the virtues of induction stoves and tested out just how fast they can cook. In it, the author conducted an experiment: cooking 11 pounds of potatoes – half on an induction burner, and half on a conventional electric burner. In the end, the potatoes on the induction stove were DONE before the pot on the conventional electric burner had even come to a boil. Talk about saving time! 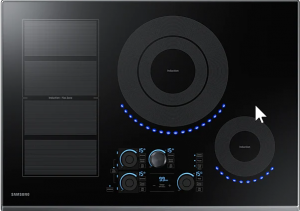 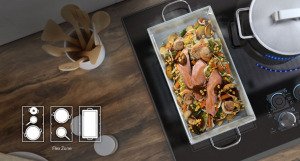 We also like the versatility of some induction stoves that include a “bridge” element like the Samsung cooktop pictured above. These are ideal for those who, for example, LOVE pancakes and want to use a griddle on their stove. It can also be used to make gravy in a long roasting pan rather than transferring it to a pot. So many possibilities.

Pancakes aside, the bottom line is that induction cooktops do cook food more quickly and are quicker to adjust to temperature changes. The temperature is more precise than either traditional electric or gas stoves. The “magic” happens in the electromagnetic field below the glass cooktop surface. It transfers current directly to magnetic cookware, causing it to heat up. This is also why you may need to buy new pans when you add an induction stove to your kitchen. Frankly, we’d love a reason to buy all new matching cookware, so this seems like a plus to us.

Induction stoves are MUCH safer than their gas countertops for several reasons. Many people don’t realize it but venting every time you use a gas stove is imperative – it’s not just for when something has scorched on the stove. As Richard Shaughnessy, Ph.D., director of research and manager of the Indoor Air Program at the University of Tulsa in Oklahoma states in this New York Times article, “Any time you’re cooking or searing something in a pan, you’re producing ultra-fine particles in the air that are not just particles, but coated with all sorts of other chemicals that you don’t want to be breathing.” In addition, nitrogen dioxide may be produced during the combustion process which is known to cause breathing issues – particularly in children.

And, in case it’s not obvious, gas stoves have open flames which can accidentally catch pot holders, aprons, kitchen towels etc. on fire. Added to that, if you have children who ‘get into everything’ a gas stove holds all sorts of dangers between risk of fire and burns from touching a hot stove. Induction stoves ONLY HEAT items with iron particles in them. In other words, it can’t catch anything on fire and induction burners aren’t as hot to the touch even if you’ve just removed the pan. (Some of the heat does transfer from the pot to the element – just like it would if you placed a hot pan on a granite countertop – so it’s not completely cool to the touch as some people believe.)

From an energy efficiency standpoint, research shows that induction cooktops are 84% energy efficient, while gas tops are only 40% energy efficient. We’ve also read that induction is 10% more efficient than traditional electric. The trick is that heat isn’t lost as it is transferred from the heating element to the pan. You won’t feel waves of heat around the bottom of the pan like you do with a gas stove as the flame heats not only the pan, but the air around it. All the heating energy goes right into the pan. The result is energy savings…and faster cooking times.

That’s enough blogging for now. We feel like making pancakes.

One Response to Why We Recommend Induction Stoves