By Steve on May 9, 2022 in Green Building, Sustainability

At steveworks, we’re not just “sustainable remodelers,” we’re also a family who chooses green living practices – whether it’s adding solar panels to our roof, purchasing an electric vehicle or composting food scraps. Every little bit helps! And we seem to attract a lot of like-minded friends who are also doing their share to protect our environment. We recently came across the BEST example of green living. A vintage gas pump turned EV charger!

A good friend of ours (who is also very modest and prefers not to be named), just purchased an electric vehicle, specifically the Tesla Model Y. Of course, the next thing you need after you purchase an electric vehicle is a charger. Most people just mount them inside their garage or on the side of the house. But our friend took this project to THE NEXT LEVEL.

“As I was figuring out where we could mount the charger, we realized that we’d most likely need a pedestal of some kind to be able to reach both parking spots. Then I had a ‘wouldn’t it be cool if…’ thought that sent me down the rabbit hole of vintage gas pumps,” he recounts. That “what if” thought become a six-month Pandemic Project that may not be as tasty as the sourdough bread we started baking over at our house but is certainly a lot cooler. 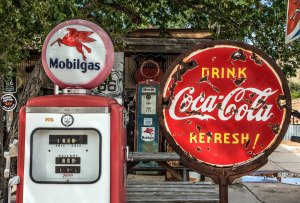 We can just picture the vintage cars that used to pull up to this old pump located on Route 66 in Hackberry, AZ.

His original hope was to find an antique pump from the 30’s or 40’s, but those are usually around 10’ tall which would have been a bit too large in front of his single-story ranch. Instead, after a lot of online searching, he found a 50’s era pump located in New Jersey – specifically a Gilbarco 904. This type of pump is shorter, has a hose outlet mounted lower (which helped maximize the available cord length), and has a distinctive “globe” on top. Since his house was also built in 1955, it seemed the perfect match!

After retrieving the pump from New Jersey, he completely disassembled it. It was a little tricky figuring out what pieces were missing and needed to be sourced from various vintage gas pump salvage dealers across the country. (Did you know that there are vintage gas part dealers? We had no idea.)

Using basic garage tools to cut, bend and drill the sheet metal, he mounted the Tesla wall connector in such a way that he can also reinstall the mechanical display if he decides to in the future (that may be a future science project). 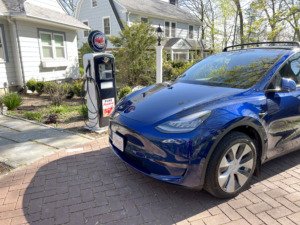 From there, it was a matter of installing lighting for the globe and adding the “pièce de resistance:” an LED lightning bolt where the cost and gallons display used to be. Of course, everything inside the pump is weatherproof to be extra safe.

After painting the frame and installing all the new internal stuff our smart friend mounted the entire unit on a concrete pad so it doesn’t blow away or get knocked over accidentally. “The finishing touch was a part I had 3D printed at the Newton Public Library that lets me store the charger handle in the same spot the old gas nozzle used to be,” he says. “Brilliant!” we say. 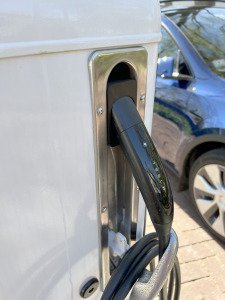 The entire project took several months from concept to completion, but only about 5 or 6 weekends doing the actual restoration and “upgrade” to electric. We looked around the internet and have seen examples of vintage pumps with EV chargers mounted to the side, but, as far as we can tell, our friend is the only one to have completely REBUILT and repurposed the entire pump to charge his car.

We love this story of good, old-fashioned ingenuity, being used to transform an antique gas pump into an electric vehicle charger!

Why We Recommend Induction Stoves
Fostering the Next Generation of Carpenters